The Relationship Between Fortnite, Parents and Their Children

Fortnite, the free-to-play battle royale, has become one of the best earning games of the year in no small part due to the millions of children who log on every day to play. Recent figures say the hit game has over 120 million active players with 68% of those players being between the age of 10 and 30. Fortnite has clearly captured the attention of children like few games before it have done. As a result, parents across the country are confused, and as our data suggests, also have slightly emptier pockets. ValueGamers commissioned a survey of 141 parents and found Fortnite, a game that is completely free to play, is actually costing parents 2x what they would pay for any other game. Our survey found:

Parents Have Spent an Average of $122 on Fortnite

Fortnite is free, but players can make in-game purchases for things like skins to customize their player avatar. It’s been reported that Epic Games, the developers of Fortnite, are bringing in roughly $300 million per month – just based on these in-game transactions. Another growing trend is parents spending money on coaches to help improve their childrens’ skills. Of the 141 parents we surveyed, the average amount they’ve spent on Fortnite for their kids was $122.17 in total with a median value of $40. 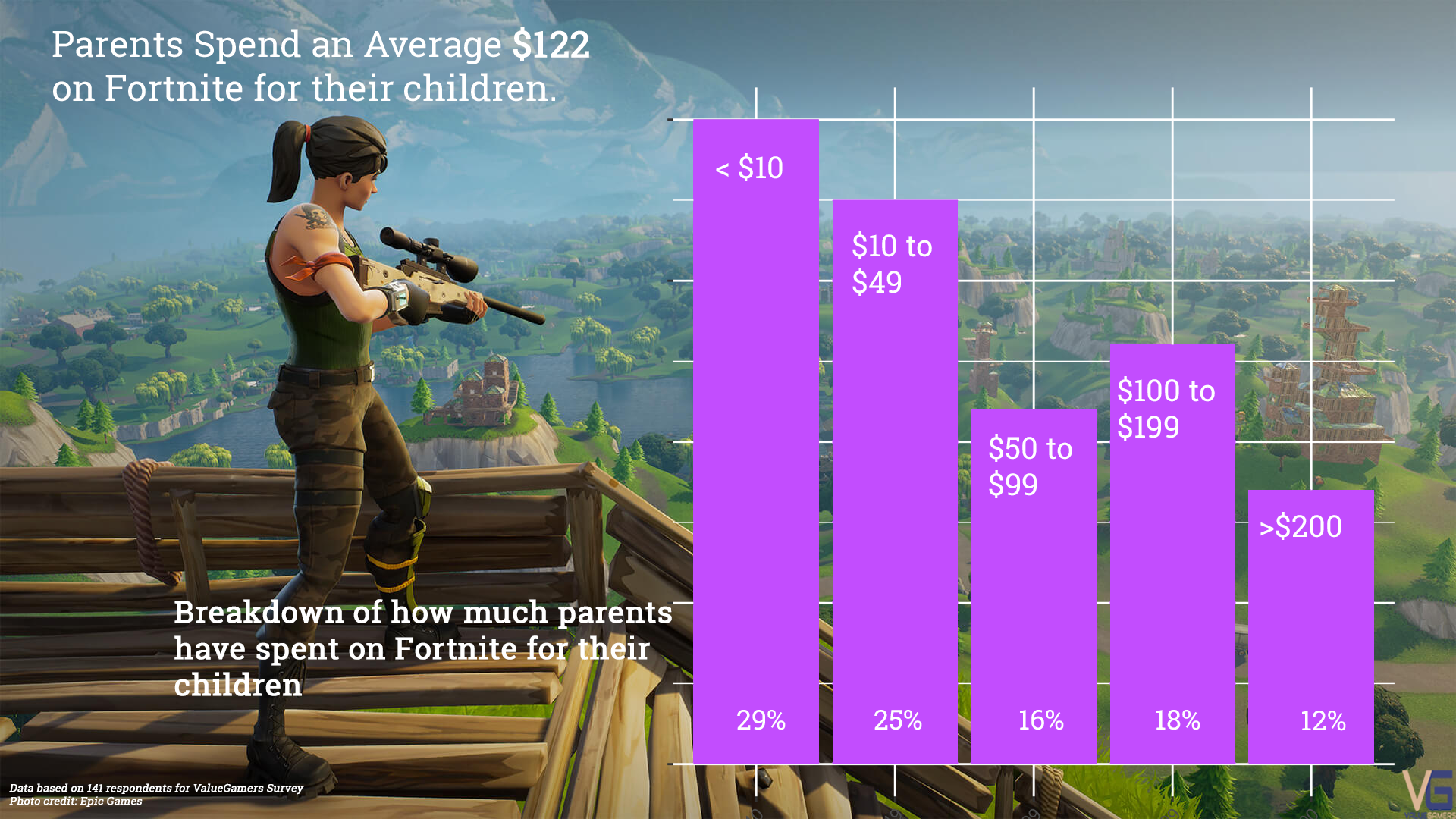 We asked parents how often their children ask to buy things on Fortnite. Their responses painted a picture of nearly 40% of children asking their parents weekly to buy things on Fortnite. 14% of kids ask daily while 23% ask a few times per week. Tellingly, only 15% of children did not ask their parents for money at all. That matches up nicely with the 18% of parents who have never given their children money for the game. One could make the assumption that if a child asks a parent for Fortnite money, the parent will oblige in most cases.

About 16% of parents said their children play Fortnite for over 8 hours at one time. Another 20% of parents said their kids play between 6 and 8 hours at a time. In total 2/5 of kids are playing Fortnite for over 6 hours every time they play. Fortunately perhaps, most children are not devoting entire days to the game according to our survey. 55% of the surveyed parents responded their kids play Fortnite for 2 to 4 hours at one time – roughly the length of a Saturday morning or some down time after school.

Parents Are Split On Their Opinion of Fortnite

Methodology and Limitation of Study

For this study we commissioned a survey through SurveyMonkey to ask parents about their children and their Fortnite playing behavior. ValueGamers wanted to understand how parents have been approaching Fortnite financially, how long they allowed their children to play and what their view on the game was. In total, our survey received 141 responses from a wide audience of parents across the United States. With 141 responses the margin of error for our study is approximately 8% for a 95% confidence interval. To see a full list of questions our survey asked see below. To see how our data broke down, visit our GitHub page here. Note: we did not use data from every question in our survey for this analysis.