It would be pretty nice to have a top-grade Nvidia RTX 3090 or AMD RX 6900 XT, but most of us are usually looking for the more affordable yet solid performers. Despite being one of the latest models, MSI's Gaming X Trio lineup has rapidly become more mainstream. The Nvidia GeForce RTX 3060 Ti is arguably the sweet spot on MSI's iconic gaming series.

MSI Gaming X Trio GeForce RTX 3060 Ti (quite the spoonful this one) brings a performance that's close enough to the higher-end GeForce RTX 3070 but at a cut-price. In this in-depth review, we'll be looking at RTX 3060 Ti Gaming X Trio to find out if it maintains the steady improvements on the Founders Edition to merit its higher MSRP. 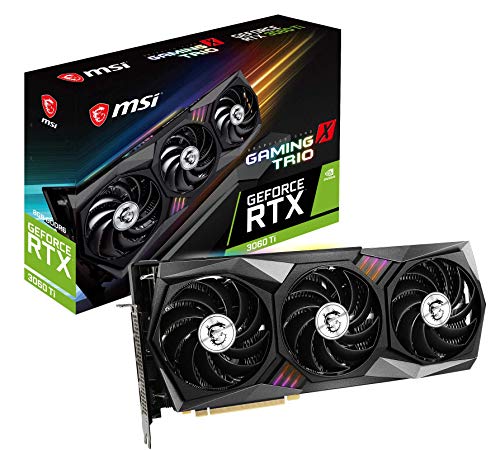 The packaging is more or less what you'd expect from a top-end model on the MSI Gaming X Trio series. It's more premium than most AIB cards from GIGABYTE and ASUS, but nothing out of the ordinary from other MSI products. Rather than a paper sleeve, the packaging includes a smaller cardboard box sitting inside the outer printed cardboard box.

The front of the box has very little info to offer. So instead, you'll flip to the backside to pick up a few highlights of some of the key features, especially the cooler design. However, you'll find a lot more documentation in the box, including two installation guides, a conventional one with diagrams and an animated one with Lucky walking you through, plus a product catalog.

The box also includes a handy graphics card holder bracket. It's quite useful when you consider the RTX 3060 Ti Gaming X Trio has a triple-fan cooler and measures 323 mm in length. That helps minimize the sagging effect that often comes with longer and bulkier graphic cards.

The first thing you'll notice is its sheer size. It's a massive triple-slot card measuring 323mm x 140mm x 56mm, so you certainly have to make sure it can fit your case before committing. Second, you'll also notice that the RTX 3060 Ti has stuck to the characteristic Gaming X Trio Series look, the same triple-fan design, where the name "Trio" comes from, and a 2.5 slot cooler.

It also comes with the same striking RGB lighting, comprising three strips across the center fan, a backlit logo and a prominent diffuser strip along the edge. If you're an RGB fan, the lighting effects can be customized using the Dragon Center Software so that you can match it to the rest of your rig, or just shut it down if the extra lights are distracting.

The backplate might split opinions. Rather than using an aluminum backplate, the RTX 306 Ti Gaming X Trio has a composite graphene backplate. One, it's quite thicker than your standard aluminum backplate, yet it still feels like plastic, something you probably don't expect on a premium graphics card.

That said, it does appear to conduct heat better than a plastic average, but it would be inaccurate to say it outperforms a regular aluminum backplate. Nevertheless, backplates are there mainly for structural support rather than optimal cooling. Plus, the rear end of the backplate includes a couple of slits to allow direct airflow through the heatsink.

The side of the card is fairly open, meaning the (evidently) stocky fin array protrudes. There's a lot of room for emitting hot air, which comes in handy for cooling. In addition, there's an anti-sag brace close to the I/O bracket that also helps cool the power delivery system.

Speaking of video outputs, this card comes with the NVIDIA reference three DisplayPorts 1.4a connections and one HDMI 2.1 output. That means it can support as many as four simultaneous displays at a max resolution of 7680x4320, or 8K. The bracket looks nickel-plated, perhaps to better withstand the elements, with a solid amount of perforation.

The MSI Gaming X Trio GeForce RTX 3060 Ti is fed by dual 8-pin power connectors. On the surface, this might sound overkill. However, this card lauds a 240W TGP that's just a little above the combined power, 225W, that the PCIe slot and one 8-pin PCIe power connector can deliver within spec. If anything, 8-pins probably look better than the previous 6-pins.

The RTX 306 Ti Gaming X Trio features the same Trio FROZR 2 cooling system that cuts across the other graphics cards in the lineup. The system includes three Torx 4.0 fans that use MSI's new combined blade system that offers more static pressure and pushes more air between the fins.

The 2.5 slot houses a long and wide heatsink for extra cooling capacity without the extra noise. The heatsink has uniquely waved fins designed to disrupt airflow, hence reducing noise, and two, to dissipate more heat. The surfaces that come into contact with components that generate heat are also custom-designed to increase maximum contact area for improved thermal transfer.

This card is built on Nvidia's latest generation of Ampere Architecture. Buying into this rapidly evolving technology sets you up for a number of benefits. For instance, dedicated cores for ray tracing, as well as AI, pave the way to real-time in-game ray acting and other features such as Nvidia Broadcast.

Similarly, RTX GPUs can employ Deep Learning Super Sampling to scale up games to higher resolutions intelligently. This is turning out to be a decisive feature as it lets hardcore gamers play at higher resolutions with just a few small performance and visual snags. That means, with DLSS, you can play ray traced games at 1440p ultra settings with this graphics card.

It also comes with 8GB GDDR6 video memory. This is more than ample to play games at maxed intended resolutions. The card also takes things up a notch with its clock speed, coming at a factory Boost Clock of 1830 MHz.

This clock speed presents a 165 MHz improvement over reference. That means the start of manual overclocks can begin, and, with a bit of fortune, end at higher overall speeds. The RTX 3060 Ti Gaming X Trio also clocks itself higher, thanks to GPU Boost, Nvidia's automatic overclocking tool.

The most practical way to test a graphics card is to run it through a string of synthetic and real-world gaming benchmarks. This gives a better representation of the card's performance relative to other cards, as well as determines the actual frame rates to expect in different representative games.

This current generation focuses a lot on hardware-based ray tracing. Therefore, the RTX 3060 Ti Gaming X Trio should be tested using a combination of ray traced games and synthetics. That also means testing all the games at Ultra settings or the highest preset while enabling DLSS wherever possible and setting to the Quality preset.

To start things off, the RTX 3060 Ti Gaming X Trio performs remarkably well on 3DMark's Fire Strike Ultra as well as Unigine's Heaven Benchmark. This powerful graphics card outperforms the RTX 3060 Ti Founders Edition on both tests. However, it still falls fairly lower than AMD's RX 6000 Series, although this is certainly to be expected.

When it comes on ray tracing, the test results paint an equally consistent picture. First, the card earns a similar score to the previous two tests. Again, the MSI outperforms the Founders Edition but falls behind the Radeon RX 6000 lineup.

However, things take a turn in the FPS tests. Given that Surgical Scalpel's Boundary benchmark offers DLSS support, the Gaming X Trio RTX 3060 Ti almost doubles the frame rate of its competitors, including the Radeon RX 68000 XT in Rage Mode. It also outperforms the RX 6800 and narrowly falls behind the RX 6800XT in 3DMark's Ray Tracing Test for navigating still images without DLSS.

Real-world gaming benchmarks arguably make or break a card for most people. First, the RTX 3060 Ti Gaming X Trio targets 1440p, so it's always interesting to see how it compares across the three major resolutions.

At 1080p, the card performs pretty similarly to the Founders Edition, rendering frame rates between 2% slower to 4& faster. This leads to an overall average difference of only less than half percent. That means there's really not any notable difference when playing games at 1080p.

The range opens up a bit more at 1440p, from 0% to 6% faster than the FE, translating to a 3% average improvement. Thanks to DLSS, it renders a significant 20% faster than the Radeon RX 6800. However, it flips entirely and comes in at 18% slower when limited to rasterized games.

At 4K, the RTX 3060 Ti Gaming X Trio brings out its huge lead over the Founders Edition. Overall, it runs at an average 4% faster and even 7% faster when compared to the RTX 2080 Super. Even more impressive, the card outperforms the RX 6800 by a massive 43% across all games, underlining the impact of DLSS.

But one question that keeps popping up is: Is the RTX 3060 Ti Gaming X Trio playable at 4K? In actual FPS, this graphics card outperforms the FP, but it's also worth noting it still struggles to hit 60 FPS for most games at Ultra settings. However, some titles such as Doom Eternal and Minecraft RTX are even able to exceed the marker.

All the same, most games can play at 30 FPS or higher when all the bells and whistles are enabled. This probably cuts across several current-generation console games, particularly in Quality mode. Furthermore, you can expect this level of performance with improved graphics at the same time.

As you would probably expect from an MSI graphics card, the RTX 3060 Ti Gaming X Trio is very much capable of pretty cool temperatures. It delivers the impressive performance we have just walked through while running significantly cooler than Founders Edition. But this is expected since it comes equipped with a triple-fan cooler; plus, it's also longer and thicker.

What particularly stands out is how this card delivers such cool temperatures without any fuss. The fan blades spin at a comfortable 1158 RPM on average. More so, the fans are barely audible over the CPU cooler, so put this card in a case, and you won't make out any sound from the card, even under load.

Despite these relatively slow speeds, the fans still maintain the GPU at consistently low temperatures below 68°C. The RTX 3060 Ti achieves this despite the rather towering 240W TGP limit. In addition, these low temperatures and lofty TGP allow the card to boost up to 1960MHz, with the average falling around 1920MHz.

The RTX 3060 Ti Gaming X Trio from MSI is certainly not the cheapest GPU on the market, but it makes a solid case for its target market. For starters, it sports a brilliant design that looks aggressive without trying too hard. Aesthetic aside, MSI has paid great attention and made big strides to improve cooling and minimize noise levels.

Some might argue that MSI has probably over-engineered some elements on the card, such as cooling, thus driving up the price. But every gamer will agree that cooling is a factor worth paying for. Considering the low temperatures and reduced noise levels it runs, the MSI GeForce RTX 3060 Ti Gaming X Trio is a solid mix of aesthetics and performance.