Esports, Twitch, and Instagram have made it possible for avid gamers to make a living off of playing video games. It is not an easy road however. To make a full time living off of gaming, you usually need at least several thousand followers and be skilled enough to win a handful of esports competitions. Such skill usually requires hours and hours of dedication which can be difficult if you have school or a main job to attend to. If you are determined to make a life out of gaming though, these are the easiest cities to do so based on the salary to live comfortably. 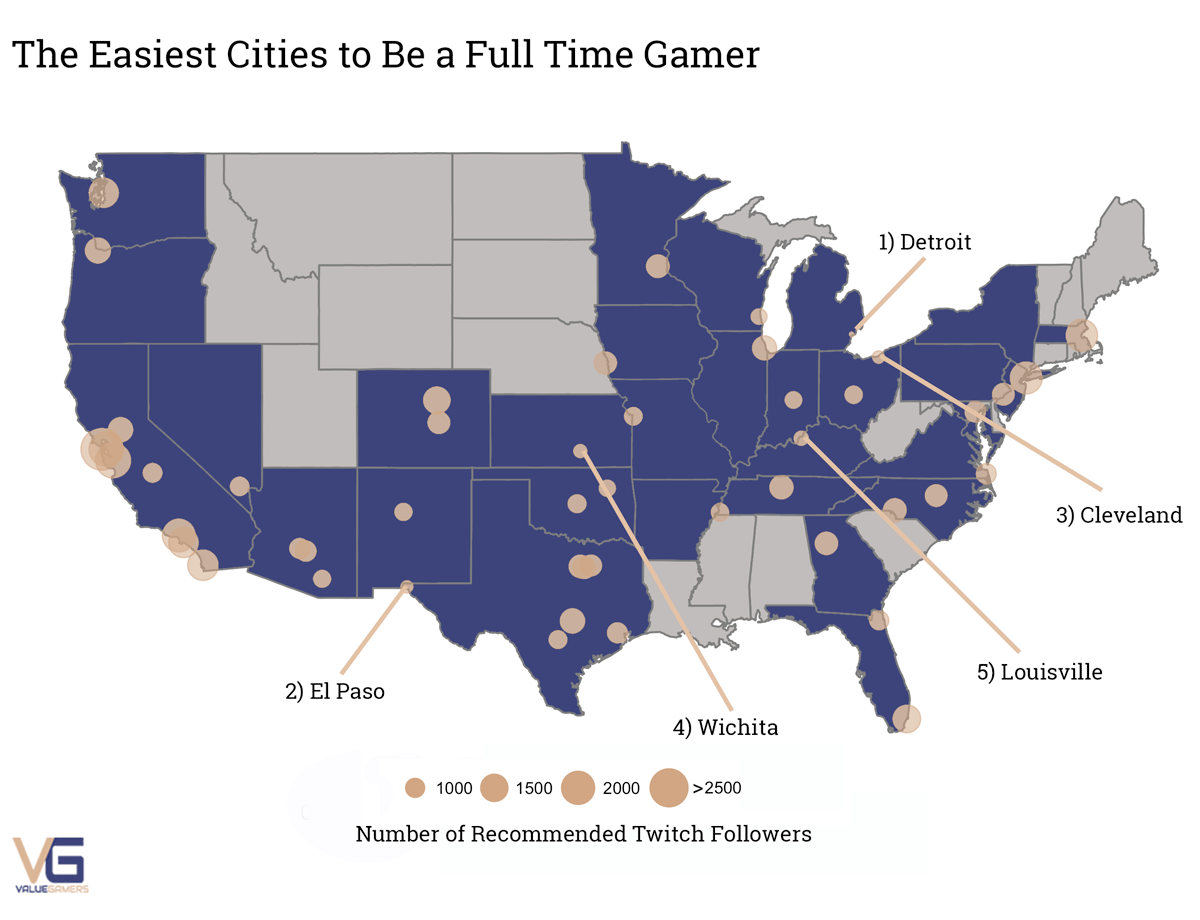 Easiest Cities to Be a Full Time Gamer:

The following 5 cities are the easiest in the US to live comfortably while gaming full time. If you currently live in a high cost of living city, moving to one of these can make a dream of gaming full time much easier. Revenue you get from streaming is not tied to the city you live, so having a high income in a low cost of living city can make it easier to make ends meet. Here are the five:

The Motor City has a low cost of living making it easy to live comfortably with a $43k salary. Assuming as a Twitch streamer you make $3 per subscriber, you would need at least 1,214 subscribers(not including donations or esports winnings)

The far-western Texas city is the easiest place to make it as a gamer in the southwest. If you fancy great TexMex and hot summers El Paso may just be for you.

Cleveland may get a bad rap sometimes, but one of the largest midwestern cities is quickly revitalizing itself. Moving there now while rents are cheap can make kick starting your gaming career much easier. Living in Cleveland also makes it easy to reach larger, more expensive cities like NYC and Chicago.

As midwestern as they come, Wichita is another one of the easiest cities to be a full time gamer. In Wichita, just to cover expenses you need about 682 followers on Twitch (1,364 to live comfortably).

If you want to end up in the south, then Louisville may be the city for you. About 1,400 followers on Twitch can have you living comfortably in the Derby City.

The Hardest Cities to be a Full Time Gamer

The hardest cities to be a full time gamer are true to their name. To make it in the top 5 cities as a full time gamer you would need anywhere from 1.5 to 3x the number of Twitch followers as gamers living in the less costly cities. Making up that difference is not an easy feat either. According to SullyGnome, a streamer with between 600 and 1,300 followers will need an average 2,644 days to double their follower count – that’s about 7 years. 1,200 followers in any one of the following cities would just barely cover expenses – meaning you would need to rely more heavily on donations and esports earnings.

The three major cities of the Bay Area are all the hardest to make it as a full time gamer. San Fran however is by far the hardest. Tech jobs in the city have driven up the cost of living over the past two decades making it hard to live for most of the city’s current residents. Aspiring full time gamers may want to avoid the Bay Area.

Just a little bit away from San Francisco, San Jose has sky high rents making it hard to just get by. We project you would need around 3,000 Twitch followers to make it comfortably in this NoCal city.

It’s once cheaper sister city, San Francisco has made Oakland one of the more expensive places to live thus one of the harder cities to make it as a full time gamer.

Like NoCal, SoCal is also a tough place to make it as a full time gamer. While not nearly as bad as San Francisco, you will still need to put in many hours to reach nearly 2.7k followers. On the flip side, a major city like LA will get you closer to more esport events where you may be able to win more money.

Unsurprisingly, the Big Apple is also pretty hard to make it as a full time gamer. Rents and healthcare in NYC are very expensive, so even making enough to just cover expenses may prove a tough challenge.

To see how all 50 cities rank, check out the table below. We found that to survive as a full time gamer in the U.S. you will generally need to make an average $69,119 per year which will require about 1,920 followers on Twitch (assuming you do not solicit donations or make esports earnings). While it is of course doable, it will not be easy. Moving to a cheaper city can give you more time and leeway to build up your follower count.

To determine how many followers one would need to make that salary, we dug around into what typical Twitch streamers earn. To maximize the amount you earn on Twitch, you need to be a Twitch partner – which represent a small minority of total Twitch users. When you are a partner however, consensus is that every follower will earn you about $2.50 + every 100 followers earning you an extra $2.50 from running ads on your channel. We also looked at famous pro-gamers to see what their earnings looked like. Ninja, arguably the most famous, makes about $3.50 per follower – which is likely one of the highest on the platform (the more prolific your profile, the less Twitch takes). Since we are just trying to gauge how much it costs to live comfortably and not rich, we settled at $3.00 per follower on Twitch to determine how many you would need to live in each city. We excluded potential earnings one could make with donations and esports earnings – which would cut into the number of followers you would need.