How Big is Red Dead Redemption 2?

Red Dead Redemption 2 is the most anticipated game release of 2018. The follow up to the Rockstar’s classic is purported to be a behemoth of a game in multiple aspects. Early reports show the game needing 99GB of space to download on PS4 and taking upwards of 63 hours to complete the game (not including the endless hours of playing in the game’s open world). We like charts at ValueGamers and wanted to create a few that can help show how much of a behemoth this game really is.

RDR2 is truly massive. When it comes to file size, other well known open world games do not come close. RDR2 has a download file of 99GB for Play Station 4. The following chart shows you just how much bigger that is than other famous open world games. 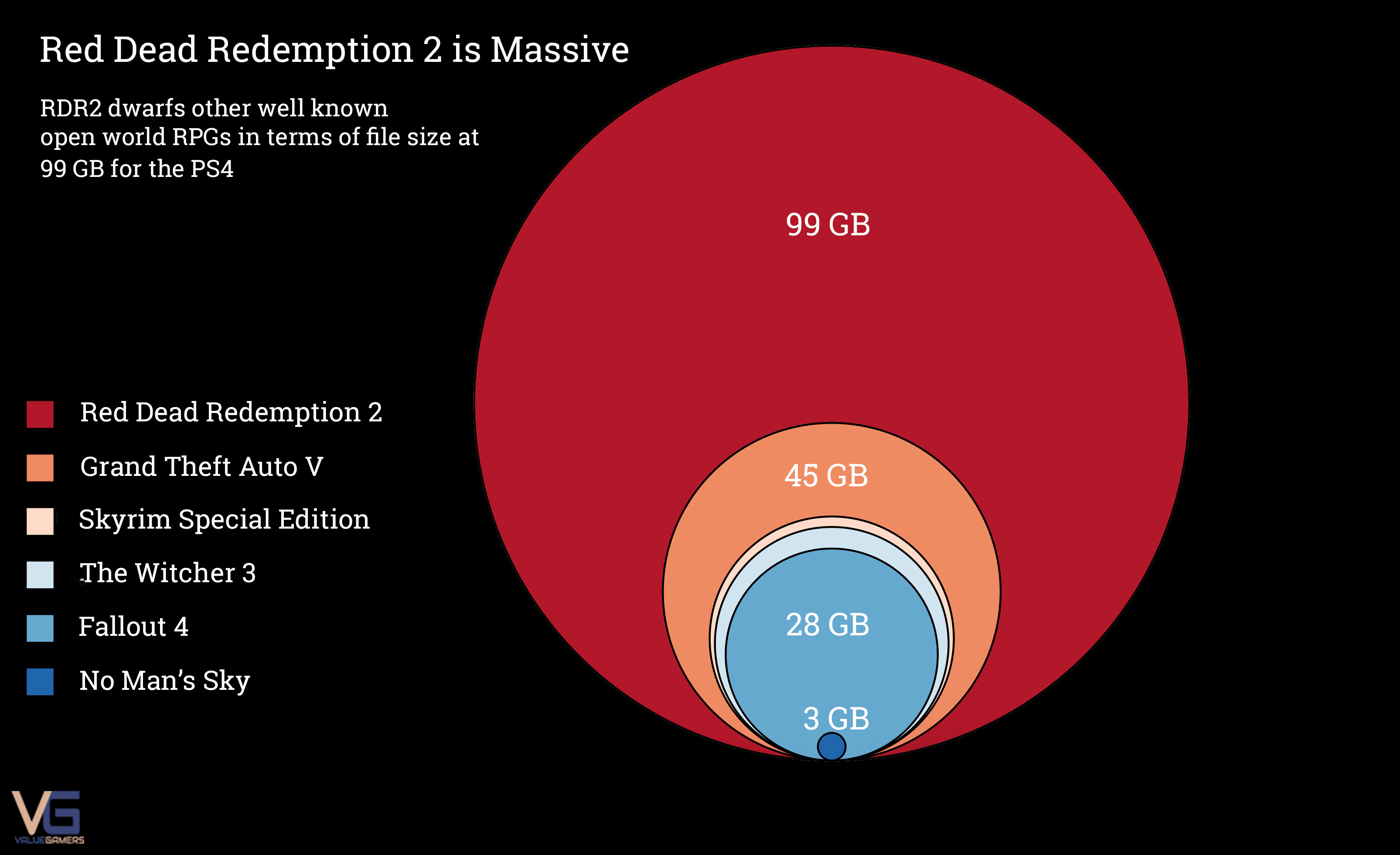 How Much Dialogue is in Red Dead Redemption 2?

RDR2 has reportedly over 500,000 lines of dialogue. That is more dialogue than Lord of the Rings and Harry Potter combined. For reference, there is no equivalent in entertainment with that amount of dialogue. To understand the scale of it, we compared the number of lines of dialogue in Red Dead Redemption 2 to other well known games as well as some of the most famous books in the world. 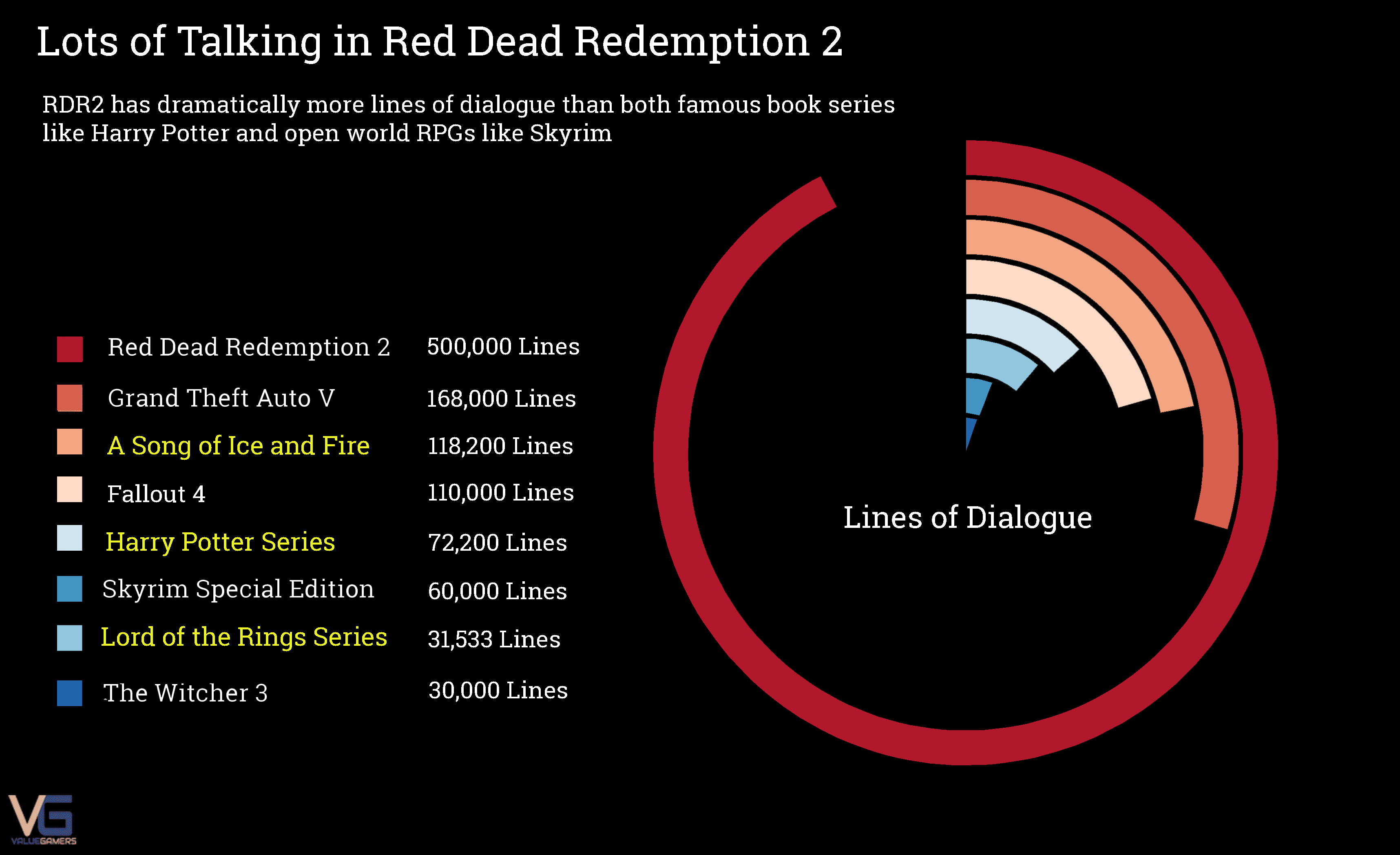 Essentially if you made distilled the entire dialogue of Red Dead 2 into a book, it would be a about 4x the size of the A Song of Ice and Fire series, which if you’r familiar, know take a long time to read. Put simply, Red Dead 2 is something new entirely for not just video games but entertainment in general. There simply has not been a medium with this much interaction within itself ever.

While Red Dead Redemption has been long awaited, it doesn’t seem like it will be stealing Fortnite’s spotlight anytime soon. Even in the week leading up to Red Dead’s release, Fortnite was still dominating Google searches relative to RDR2 basically everywhere in the U.S. 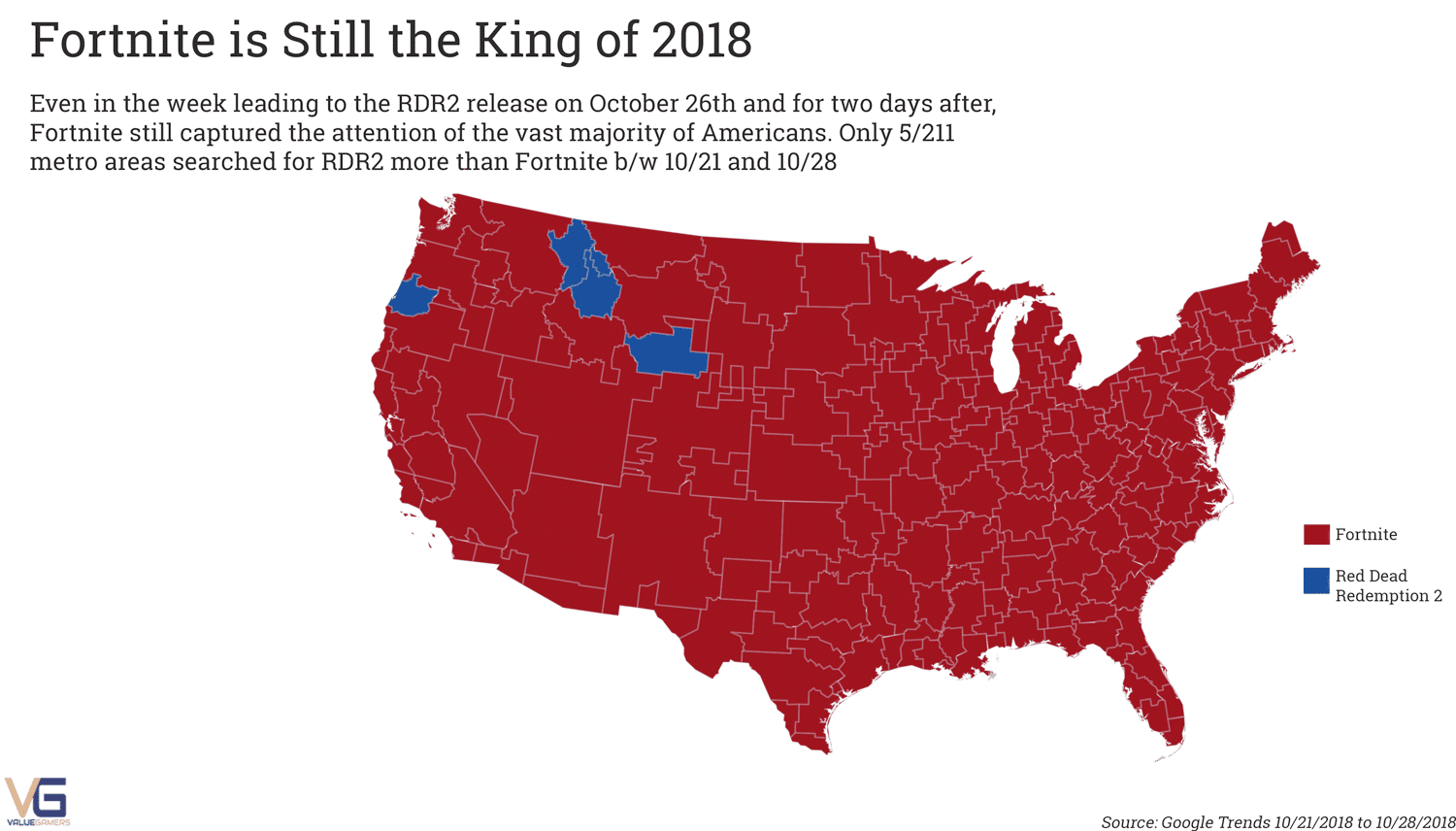 Of the U.S.’ 211 metro areas, only 5 had a higher search intensity for RDR2 than Fortnite. Ironically, it is in the wide open outdoor areas of Wyoming and Montana where RDR2 actually more popular than Fortnite.

If you are a first person RPG enthusiast you probably have to be somewhat concerned with this data. Especially with analysts saying they don’t predict Rockstar to have a game reach the same level of success as GTA V. There is good news however. Early search interest for GTA V is about the same as it is for RDR2, which went on to be the best selling form of entertainment in history. Then again, GTA V did not have anything close to the juggernaut that is Fortnite to compete with at the time. First person RPGs and multiplayer shooters will continue to capture the attention of gamers, though it seems for now the latter is doing a better job at attracting a broader audience.

To determine the number of lines in a book series, we took the word count and divided by 15 because the average sentence has between 14 and 20 words.