It's pretty easy to see why RGB case fans have become more popular than ever. We all know that proper cooling makes a whole world of difference to your PC's performance. But with RGB and tempered glass becoming more affordable, it's become more accessible to get that push in performance while also giving it a stylish edge.

The best RGB case fans aren't the most colorful, but the reliable ones. The ones that you can consistently count on for tons of airflow to keep your top-of-the-line hardware cool and keep it running at its best. 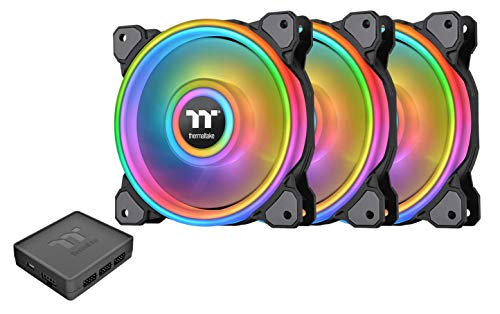 The Thermaltake Riing is probably the best rgb fan lineup on the current market. The Quad epitomises how the company finds the fine balance between form and function.

These fans have a great level of airflow, the 120mm variant producing a 41.13 CFM. They also produce remarkably brilliant illumination, thanks to a whooping four RGB loops! More so, these fans are impressively user-friendly, with the introduction of a 9-pin USB connector to power both the fan and RGB. Say hello to less mess?

Thermaltake has also introduced the "RGB PLUS Ecosystem", a feature that allows you to sync the fans up with a smartphone, then tweak around various settings entirely via voice commands. With a mere, "Hello TT", you can adjust the light modes, brightness, speed or even turn them off. Additionally, you can also sync the fans with Amazon Alexa to reflect the current weather in your area!

These TT fans have a maximum rotational speed of 1500 RPM. You'd expect them to be quite loud. But since they use a hydraulic bearing to reduce friction, this leads to a low max noise level of 25 dBA. The only downside to these fans is they come in a pack of three, hence are quite expensive. That said, it's definitely worth it with all the features and lighting. 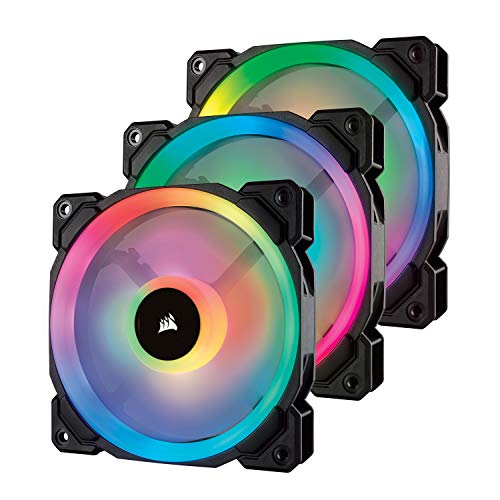 These RGB fans might not produce the highest airflow CFM, but they still perform remarkably well and deliver some of the best static pressure. If you're looking for RGB fans to blast air through obstacles, the LL series from Corsair is worth the look.

These fans come with two RGB loops, one on the exterior to produce a halo effect, and an inner one that shines RGB light onto the fan blades. The loops feature eight discrete lighting zones which can be customized using Corsair's iCUE software. The software lets you to sync your lighting effects with any other peripheral from Corsair.

The LL series can be bought individually, dual or triple pack, in two size options; 120 mm and 140mm. This gives you a couple of different airflow configuration options. The performance is quite decent, producing a 1500 RPM speed and a reasonable 24.8 dBA maximum noise level. Additionally, the fans come with two 4-pin connectors, making installation quite straightforward. 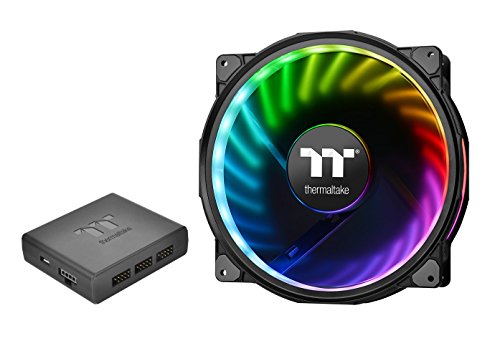 If you want the biggest and best RGB case fans, Thermaltake Riing Plus 20 are the ones you should be looking at. These fans are pretty huge and, unsurprisingly, pump massive amounts of air into your system.

With a 117.96 CFM, you're better off making the most out of these beatly fans at the front of a case. They might not be the most quiet, at 29.2 dBA max. noise level, but the raw airflow power and brilliant RGB lighting more than make up for it. Thermaltake also includes the flexibility of using these fans with or without a fan controller. This also includes proprietary software, which allows you to tinker with various RGB options.

The RMP, at 1000, is certainly not the highest, but it definitely gets the job done. More so, using the self-lubricating hydraulic bearing reduces friction significantly and overall improves their thermal efficiency. 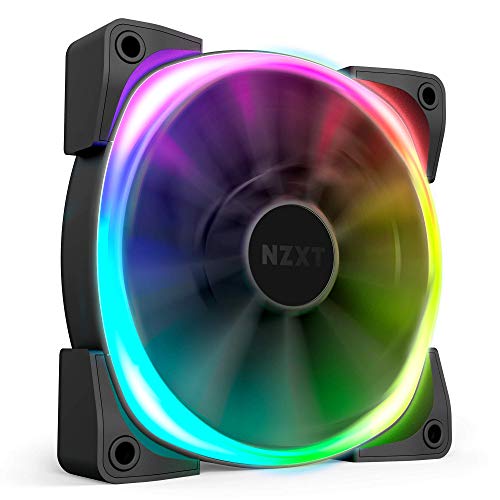 NZXT might be more popular from their cases, but they are no slouches in the RGB case fan department either. In fact, their Aer fans deliver some of the highest CFM featured on this guide.

Each Aer fan consists of winglet-tip blades that optimize airflow, thus doing a brilliant job of pumping sufficient air into your system. Furthermore, these fans use fluid dynamic bearings to reduce friction, meaning near-silent operations. Unfortunately, they only feature one RGB loop. However, it's designed uniquely to produce some great aesthetics.

These fans require a controller or an NZXT "i" case for the lighting to work, which is a bit inconvenient if your only need one of these. The HUE 2 lighting controller, however, allows you to connect and sync up to five fans, producing the ultimate RGB light show. It's worth then mentioning that the Aer RGB 2 fans can be bought individually, in a dual or a triple pack. 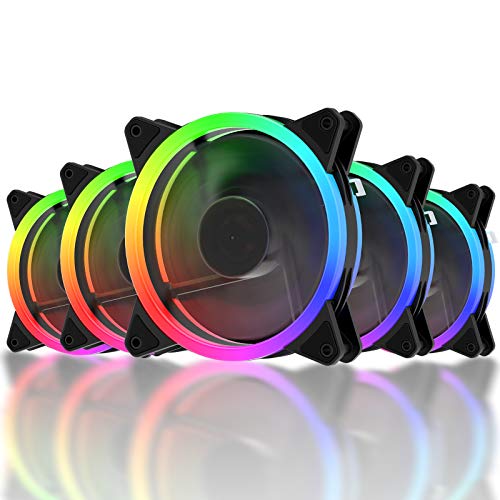 If you are looking for the best RGB fans on a budget, the UpHere RGB might be right up your alley. These are basic fans that still get the job done done pretty well.

For starters, the 120mm RGB fans produce a more than decent 1100 RPM. They only create a mere 17.6 dBA of noise, thanks to the hydraulic bearing and rubber bands to dampen noise. You might not have too much flexibility, but you'll certainly get proper cooling on your system.

These RGB fans don't come with software, but rather a remote control to change colors and effects. They are undoubtedly an attractive option if you want a huge volume cooling on a budget.

Before you go ahead and buy the RGB case fan which suits you best, there a couple of things you need to keep in mind. The last thing you want is to unpack your new product only to find it's not the right fit, incompatible or mediocre quality.

Airflow is incredibly vital to any gaming PC build. It ensures that your PC components still function smoothly and optimally no matter the tons of heat your hardware produces. There are two different types of fans:

These deliver the best performance when there are no obstacles in the way of the airflow. Generally, these fans pump air at a higher CFM (Cubic Feet per Minute). With more efficient natural flow, airflow fans are more suited for cases that have plenty of open space.

These fans dissipate air more evenly than AF fans. While they might not pump as much air volume as their counterparts, they are much more suited for cooling when they are obstacles in the way of airflow. This makes static pressure fans ideal for a CPU heatsink or a cooler radiator.

RGB case fans come in a couple of different sizes, mainly 120mm, 140mm and 200mm variants, making it important for you to find the right fit for your case. Fortunately, plenty of cases support most if not all fan sizes, although some can be exclusive. Make sure you check out the correct dimensions before buying.

The best RGB fans come with controllers, which allows you to have several fans running in one unit. Therefore, mixing and matching different sizes isn't that much of an issue. For instance, some people have two 140mm fans at the front and a 120mm at the back, which creates a positive pressure setup. Having mentioned this, if you want to check your pressure direction quickly, amp up the CFM of each intake and exhaust fan, then infer from your observations.

In case your option lacks controllers, you'll need RGB headers on the motherboard to work this out. There are normally two types of such headers; 5V 3-pin for addressable RGB LED devices and 12V 4-pin for non-addressable. Keep in mind that plugging into the wrong header can damage your fan or the RGB lighting.

Placement is just as important to fan performance. The goal is to configure your fans in such a way they can generate positive air pressure. This restricts the amount of dust that enters into the system, making it easier to clean and maintain your PC.

However, this is not to say that a negative pressure setup doesn't work. On the one hand, it exploits air holes in the case, meaning dust tends to accumulate in most gaps on the case. On the other hand, this configuration can push hot, stagnant air out more efficiently, thus improving cooling.

Loud fans are bygones in this day and age. Nowadays, fan noise levels range from as low as 10dBA to only about 40dBA. For context, 10dBA is the sound level for a pin drop or breathing: 40dBA would be the equivalent of a babbling brook or a soft conversation.

It's worth noting the higher the Revolutions Per Minute (RPM) in a fan, the more the noise. Faster equals louder. Since both are crucial aspects of a great RGB case fan, the key is finding an option that balances the two reasonably well. In which case, getting an RGB fan with adjustable speeds is definitely a plus.

Fortunately, the case fans we've featured on this list aren't particularly loud, with the highest recording a max noise level of around 25 dBA.

When it comes to RGB case fans, people tend to focus on lighting and performance mostly. There's nothing wrong with this, though it means design is oftentimes overlooked.

Design is key for two things. One, it determines how stylish your PC looks in the end. Second, it also determines the convenience of use. A well-designed fan should be straightforward to mount and fairly easy to maintain. Furthermore, if the design is really intentional, the RGB case fan will likely sport some pretty nifty features, such as rubber pads for more durability.

RGB fans can range anywhere from $30-$300, or even higher. However, the key thing to understand is that the price doesn't always reflect the performance. This means a cheap RGB fan might not necessarily be bad; at the same time, an expensive one doesn't imply it's the best or the one for you.

However, it would be remiss if we failed to mention pricier models do tend to come with more features than cheaper ones. Therefore, you'll need to budget accordingly, depending on your particular needs and preferences. That being said, you can always find basic features on an affordable, up-to-par RGB fan.

It stands for Asynchronous-RGB. This means the fans run out of sync, consequently producing dedicated and unique colors.

2. How do I create the rainbow effect using ARGB fans?

You don't have to. ARGB fans are tuned to produce the rainbow effect automatically.

3. What kind of connectors power an RGB fan?

There are three main types of connectors to power a fan:

The Best Mini ITX Case In The Market