Football is back and that means a new Madden for sports gamers. The start of the new season is one of the best times to play as anticipation for the upcoming NFL season mounts. New rosters and updated player ratings are available; teams like the Jaguars, Rams, Vikings and dare we say it…Browns, have exciting talent filled depth charts that will provide for big play action in online matches. In addition to the players however we also get new playbooks and that is what we’re discussing in this guide. What is the best offensive playbook in Madden 19?

The Pat’s West Coast playbook is the best offensive playbook in Madden 19. In past years, running the ball to open up the passing game has been a strategy used by many professional and recreational gamers. Plays like HB sweep and counter X were extremely effective for catching your opponent off guard and breaking huge touchdown runs to the outside of the numbers.

Unfortunately, this year’s ball carrying doesn’t seem to have the same allure as the previous generations. With clunky rushing mechanics and the seeming inability to cut as instantaneously as before, you shouldn’t utilize your HB nearly as much.  Running the ball while holding the right trigger to sprint makes it near impossible to change directions quickly therefore north-south style rushing plays will be the best option to get anything out of your half backs.  Because of this ineffectiveness, pass heavy playbooks like the Patriot’sWest Coast will be the most competitive in Madden 19.

The West Coast playbook has been a favorite among professional Madden gamers in years past. Ultimate League players like Drini, Skimbo, Young Kiv and Blocky have been using this formation to dominate the competition time after time, and for good reason. When used correctly, it’s impossible to cover.

Drini, Skimbo and Young Kiv all take fondness to the gun bunch weak formation because of its versatility in the passing attack. As long as a player can effectively manage two to three reads each play, this formation can be used to break down even the best defenses. The beauty lies in the ability to have receivers break their routes to multiple levels of the field at the same time. This forces the opposing cornerbacks on the outside to choose only one receiver to cover.

When that happens you are almost certain to have a second route wide open on the same side of the field. The formation is particularly effective against defenses which crowd the middle and do not have the outside linebackers guarding the flats. Even if your opponent adjusts, they will leave the center of the field open.

The Best Plays of the Patriot’s West Coast Playbook

Plays like mesh post, deep attack, corner strike (pictured below) are perfect plays for executing the strategy. Each one offers a deep post or corner route, with a drag or check down underneath. If your opponent gets impatient with your constant 5 yard gains to the HB or TE on short routes, they will likely switch to underneath coverage. That will leave your deep route wide open for an easy score. For those experienced competitive Madden players out there, be careful not to fall in love with the corner routes like years past. 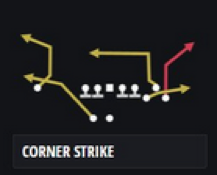 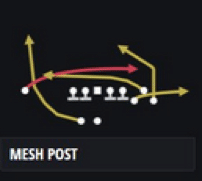 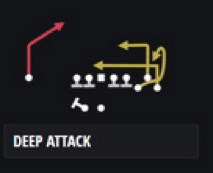 Much like the rushing game, it appears this route has been somewhat nerfed. Receivers tend to break their routes much later than in Madden 18, leaving you susceptible to interceptions.  The single break routes appear to be a superior game plan to beat the corners this year.

Read: Record Your Best Madden Plays with a Capture Card

The ineffectiveness of this year’s corner routes makes the Patriot’s offensive playbook the best in Madden 19. It has a Pats gun bunch set which is nearly identical to that of the West Coast scheme with an even more effective formation. The split close Pats formation offers similar benefits as the gun bunch, except you can execute the same strategy on both sides of the field at once! X drag trail and HB wheel are the two most effective plays of this part of the play books. When used correctly can open the door for a larger play selection. 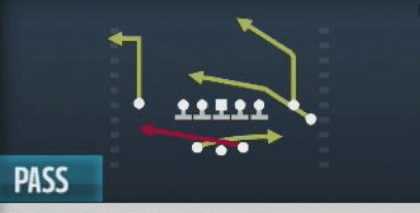 With HB’s to both sides of the quarterback and receivers on both sides of the field, your options are endless. Using these plays will have receivers deep and underneath on both the left and right sides. This gives even the best Madden players fits. Another advantage of this set is the ability to add in additional layers of diversity with the play action.  Even though I am not a fan of this year’s run game, if you wish to use it with this set, the multiple layer passing attack opens up the middle of the field for the occasional halfback draw. A few of these mixed in with your multi-faceted passing game will leave you primed to hit your opponent with a devastating play action play like PA F slide or PA Y shot throwing the ball vertically down field. 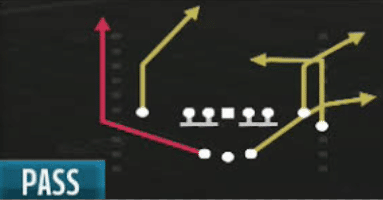 This formation is surely primed to make an appearance on the professional Madden circuit this year. Your opponent cannot cover the deep and shallow levels of both sides of the field at the same time without leaving the middle open or vice versa. Luckily no matter which they choose to cover, you’ll have an answer it.

Read: Hear all the Madden action with a sound card