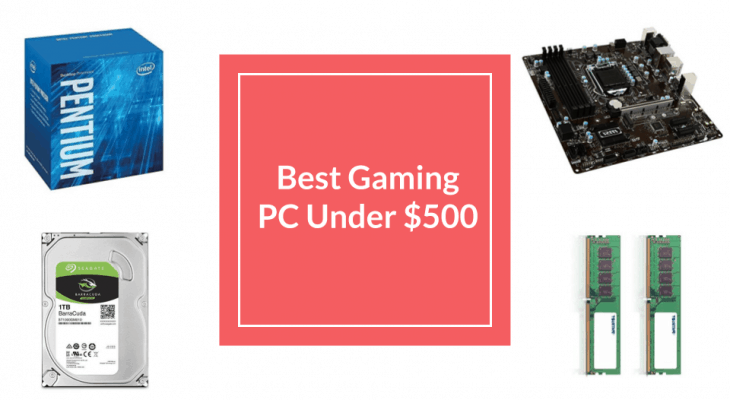 Five-Hundred dollars. The quintessential round-numbered, meandering, ballpark estimate someone tells you when you ask how much they want to spend on a new gaming pc build. It seems like a fair amount, $500 is nothing to sneeze at after all. To some, it’s the savings in the jar after a few weeks pay. To others, it could be an entire summer of mowing lawns or washing cars, which is why it is difficult to tell someone that $500 is still considered “low-budget” in the world of modern computing.

It’s not all bad news though- building a gaming pc under 500 bucks is absolutely possible, and judging by the ubiquity of affordable components like Nvidia’s Geforce 1050Ti and AMD’s Ryzen 3 2200G, budget builds are extremely popular!

With some entry level components, a little bit of deal-hunting, and a casual readthrough of this build guide, you will be all set to create your perfect Gaming PC Under 500 dollars. To kick things off in our gaming pc under 500 dollars build, we’re going to select the Intel Pentium G4560.

Clocked at a base 3.5Ghz operating frequency and sitting in the LGA1151 socket, the Intel Core Pentium G4560 features 2 cores and 4 threads, with a 3MB L3 cache and a TDP of just 54 Watts.

Now, I know what you are thinking. In fact, your eyebrows were probably already raised when you saw “Pentium” instead of i3 or i5. The question remains though: Why use a dual-core CPU in 2018? Well, the answer is simple. Intel Core has been stubbornly cranking out consumer-level dual cores on increasingly smaller manufacturing processes (The G4560 has a 14 nanometer lithography) because it can charge a premium for the jump to quad-core. This really isn’t going to hurt us though, since this is a more gaming-oriented build. Most games use only a single CPU core and rely on the GPU to do most of the heavy lifting. This is good news for us, since the G4560 has a very quick clock speed at 3.5Ghz, the CPU will have no trouble with popular games like Doom, Fortnite, or Star Wars Battlefront II, and the built-in hyperthreading capability will make up for some of the performance loss in other areas. The G4560 does include a heat sink, which should be sufficient especially considering the chip is not known to overclock well. (The motherboard in this guide does not support overclocking anyway) However I always recommend an aftermarket CPU cooler and if you can scrape up a few more bucks it’s definitely something you should consider for better thermal performance and longevity.

So all in all, you’re getting a CPU that looks like, acts like, and sits in the same socket as an Intel core i3 8100, for half the cost. Not bad! If you do decide later on to grab one of Intel’s processors from the i3, i5, or even i7 lines, you can rest easy knowing that you can just pop out the chip and slide in the new one. More on that in the “motherboard” section of this guide. The budget-level offerings from motherboards are nearly endless, but I feel that the MSI Pro Series B250 PRO-VDH strikes the right balance between price, reliability, features, and flexibility.

You’ll notice that there are even cheaper options, however brand-questionability, user reviews, personal experience on my part, and a general tendency to err on the side of caution concerning entry-level motherboards leads me to feel justified in the decision to pick this board. The B250M PRO-VDH features onboard video out, USB 3.1, ESD protection, Turbo M.2, and is Intel Optane ready. The B250M also sports a debug LED, handy for diagnosing pesky POST codes. The board is micro-ATX, but its small size doesn’t mean anything is missing. You will in fact find 4 regular DDR4 RAM slots, (Allowing a speed of up to DDR4 2400) 1 PCIe slot, and 2 PCIe Express slots.

Another interesting feature on this board is the Intel Optane compatibility. Budget-minded PC enthusiasts can purchase a stick of M.2 Optane Memory to speed up slower “spinning disk” hard drives for about $50. This technology is not compatible with our current processor, but it’s still s good option to keep in mind for upgrades later down the road.

The B250M comes out of the box ready with the latest BIOS and a 1 year limited warranty. Shortages and alleged price fixing on the part of the three major memory manufacturers has caused the price of RAM to balloon uncontrollably, so we’re going to stick with 8 gigabytes of Patriot Signature Line Memory for this build.

There isn’t much to say about this RAM in all honesty. We’re getting 2 sticks of 4GB (so we’re at least getting dual-channel) that run at 2400Mhz with a CAS Latency time of 17. Be sure to select the right speed in your motherboard’s BIOS after installing your RAM.

Other than that, the heat spreader is black. Which is nice I guess. Considering the low budget of this build, it’s not surprising (but still disappointing) that we’re not going to be able to put in an SSD. The good news is that the price of traditional spinning disk hard drives has never been lower, and the Seagate 1TB BarraCuda is no exception. At about 50 bucks and just 2.5 inches in size, the Seagate BarraCuda packs a one-two punch of affordability and compactness.

The spindle speed of 5400RPM is nothing to write home about, but the 128MB of cache is. This high cache size, combined with something Seagate calls “Multi-Tier Caching Technology,” which applies a layer of NAND flash into the mix, ensures that this drive is no slouch in the speed department and will have no problem going toe-to-toe with more traditional 7200RPM offerings from other manufacturers. Seagate says these drives are “inspired by the past but ready for the future,” and Seagate seems willing to back that up with a 2 year limited warranty. Our hardware means business, so we’re going to need a case that means business too. That’s why the Rosewill SCM-01, with its “business-in-the-front, business-in-the-back-too,” mentality is perfect for our system. With just a single red accent line in the front panel, the aesthetics of the SCM-01 are uncompromising to say the least, and maybe even the most.

Featuring a vented side panel that opens car door-style, an included exhaust fan, 1 USB 2.0 port and 1 USB 3.0 port, the SCM-01 has you covered in terms of major features. The case also includes one 5.25 inch bay, three 2.5 inch bays, and three 3.5 inch bays. Plenty of room for our storage components and then some. The SCM-01 is a MicroATX mini tower, which means it’s going to get a little tight in there cable-wise, but its small size reflects its small price. It’s hard to argue with the savings. I originally had the Thermaltake Versa H15 in mind when I was putting this build guide together, but it put us over budget by a few dollars. Gamers willing to spend the extra few dollars will find the H15 to be roomier, (because of its larger mid-tower classification) and have better airflow. It is the case that I personally use for my system and I recommend it to anyone who wants something a bit smallish but needs to fit a lot of components in. Right now all the components in our build are going to use an estimated 210 watts. It may be tempting to look at some low-spec 300 watt Chinese power supplies, but it’s worth repeating what I always say about cheaper power supplies. The savings are not worth it. Cheap and faulty power supplies can easily fry your entire system, so we’re going to go with something reliable.

Reliable, however, does not always mean expensive. That is indeed the case with the EVGA W1. At 500 watts, we’re going to to get a steady source of power with enough headroom for later upgrades. The W1 is not modular, but is 80+ White rated, an excellent certification to look out for when considering power supplies. 80+ White rating means the power supply is at least 80% efficient at all times. Something cheaper units can’t always maintain. Along with the standard protections, (Over-voltage, under-voltage, over-current, etc.) EVGA also offers a 3 year warranty with this unit. Considering the sky-high prices of GPUs today caused by the cryptocurrency mining craze, I’m happy to say that the graphics cards is one area of this build where we will not have to make any compromises. Topping off this build will be the MSI Geforce GTX 1050Ti OC, the current GPU champ of the ultra-low budget market and the perfect choice for our system.

Raring to go with a factory overclock of 1.34Ghz that turbo boosts to 1.46Ghz, the MSI 1050Ti OC comes out of the gate faster than its competitors at a significantly lower price. Sipping power at just 75 watts on a 128-bit memory bus, the MSI 1050Ti doesn’t even need a 6-pin power cable, it can receive power right from the PCIe slot located on your motherboard. This power efficiency is made possible by Nvidia’s new 14nm manufacturing process for GP107 cores, meaning what we’re getting is essentially a cut-down GTX 1060.  The sleek and slender profile of MSI’s design means this card will fit comfortably into our admittedly tiny case without any interruptions to airflow or cable management.

The 1050Ti features 4GB of video memory. Plenty for 1080p. Even demanding games like the Witcher 3 should maintain high, stable framerates on Medium and High settings.

This build means business. At $499.93(As of May 29, 2018), (Not including a manufacturer rebate on the graphics card) we have squeezed every single drop of performance we could out of this budget gaming pc. This machine is going to be your best friend for our 1080p budget gaming pc, and will make your friends on console envious of your superior graphics and framerates. Even better, we’ve left plenty of room for upgrades too. We can pop out our dual-core processor in the future and replace it with any LGA1151-compatible chip. We can also upgrade our storage with Intel Optane Memory or SSDs.

All in all, we’ve got a killer gaming machine in a tidy package, and we didn’t break the bank!

Thanks for reading this build guide! All of the parts mentioned in this article can be found on Amazon and other retailers. Happy building! I mentioned Intel Optane Memory technology earlier in this article. If you are unfamiliar with this new technology, we’ll get a little more in-depth here.

Optane works by using a hyper-fast memory modules fabricated with 3D NAND to enable faster data transfer between memory, storage, and processor. In the real world, this translates to dramatically improved performance for “spinning disk” hard drives.  Sometimes even bringing them up to par with regular SSDs. It’s a great option for gamers who are using just a single spinning-disk hard drive, provided they also have a compatible motherboard, processor, and aren’t already using an SSD for their boot drive. A 16GB Optane stick will run very cheap, but if you are following this guide to the letter, you will also have to consider a processor upgrade. I am a lifelong gamer and former computer technician, through my writings on 25pc.com I hopes to share some of my experience with you and to help as many peeps as possible enjoy the pleasures of gaming.