AMD, along with Intel, is one of the two leading companies when it comes to processors. As one of the leaders in the industry there are numerous options to choose from depending on your gaming needs. To help you with the buying process, ValueGamers put together a ranking of the best AMD processors currently on the market.

What are the best AMD processors to buy?

For a cool $200 you can get 6 cores and clock speeds up to 3.9 GHz making the Ryzen 5 2600x the best AMD processor for value. If you are building your 1st PC or on a budget but don't want to skimp too hard on quality, the Ryzen 5 2600X should be where you look. Users have been able to get the AMD Ryzen as fast as 4.2 GHz making it more than capable of playing any modern games seamlessly. This model is about $50 cheaper than the 2700x which isn't an extraordinary amount of money but for those on tight budgets can make or break their computer.

If you're ready to go all out for a CPU then the The Ryzen 7 2700X should be your first look. The Ryzen 7 2700x comes with 8 cores and 16 threads with a 3.7 GHz base clock and a 4.3 GHz boost clock. This processor comes in the all-new red prism cooler which comes with an RGB lighting system. The RGB led cooler looks great and has a big heat sink with direct contact heat pipes for improved thermal management. Also, AMD has made this cooler exclusively for the Ryzen 7 2700X. If you are a gamer and you are all about the performance, the AMD Ryzen 7 2700X will best fit your needs like a suit tailored for you.

The AMD Ryzen 3 2200G is the best AMD processor for those on very tight budgets. Rather an APU than a CPU, this processor comes with an integrated GPU meaning you don't need to buy a separate graphics card. At only about $100, you are getting a fairly decent CPU and GPU capable of handling most modern games at 1080p and 30+ FPS. Buying a dedicated CPU and graphics card would likely run you upwards of $300 to $400 meaning your saving a significant amount. 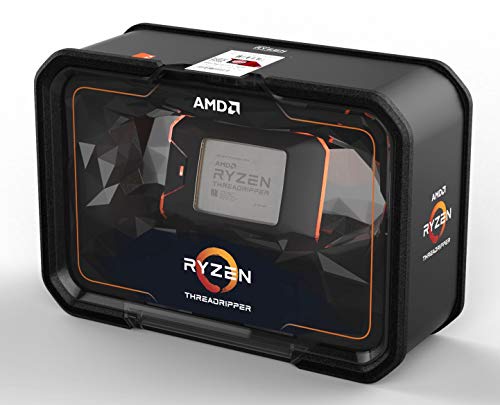 The processor contains 16 cores and 32 threads of processing power with a 3.5 GHz base clock and a 4.4 GHz boost clock. Also, the design matches the AMD Epyc server chip with contacts on the CPU and pins on the motherboard. We would not recommend buying this processor just for gaming. The clock speed is about equal to the processors we list above which is most important for gaming. The reason why the Threadripper is so much more expensive ($900) is becaues it has so many cores which is good if you're doing some intense video editing along with running other programs.

AMD vs Intel: Who Has Better Processors?

Intel is AMD's main rival when it comes to CPUs and for good reason - they both create the best processors. With the Ryzen series of processors, many would argue Intel and AMD are on the same ground. In some respects that is true. AMD processors generally come with more cores than Intel chips making them better to perform very intensive programs like video editing and even streaming on Twitch. We are ValueGamers however, and when it comes to value the Intel chips tend to have better value.

In the image above you an see two processors, one from Intel and one from AMD which both cost about $250. The Intel 9600K is effectively 20% faster than the equivalent AMD processor. You're getting more bang for your buck in this instance. We find however that as you get into the higher end, the value begins to even. As the Intel chips get more sophisticated (and expensive) the Ryzen price equivalents begin to level out in terms of performance.

Here you can see the AMD is $94 cheaper but is only slightly slower than the Intel chip. We would recommend using a tool like this one to directly compare benchmarks for different chip sets. Overall, the AMD Ryzen series is a groundbreaking processor and users will not be let down if they choose to purchase one over an Intel chip.

How To Buy an AMD Processor

Should you choose an AMD CPU for your gaming PC, there are a few things you should keep an eye out for.

When comparing between AMD processors, clock speed and the number of cores are crucial metrics to look at. When it comes to gaming the clock speed is more important while it comes to multitasking cores becomes more important. Generally, really good speed is around 3.9 GHz with mediocre being around 3 to 3.1 GHz. Ryzen processors generally have a 3 GHz base with models like the 2700X getting up to 3.9 GHz. In terms of cores, anything over 6 should let your run multiple processes on your computer (including gaming).